Here are some images I made that are more detailed than cartoons or graphics, or they are just less amusing, so I call them illustrations.

A 2012 Illustration for the New Internationalist magazine for an excellent article that quite passionately attacked the spiritual effects of our consumerist lifestyle.

A covers spread for the ETC Group (with apologies to Seurat) that covered the global trends in Nanotechnology.

A cartoony-poster and postcard from 2012 for the dedicated folks at NuclearInfo.org ridiculing the PM’s determination to push ahead with a new generation of Trident nuclear missile-carrying submarines.

A 2007 poster for Greenpeace International and People & Planet, for the 2007 G8 meeting in Germany.  It is part cartoon, part photo-montage including caricatures of the leaders of the G8 nations.

A caricature / illustration from 2007 for the New Internationalist magazine, for an article that detailed the remarkable career of Walden Bello.

A drawing from 2006 for the New Internationalist magazine, for an edition on whistle-blowers and campaigners against corruption.

Illustration for the front cover of Carbusters magazine Number 28 from 2006.

This poster from around 2004 was made for teachers to use in schools and had two versions.  The ‘sust’ features were presented as a series of separate laminated tiles which the children had to place over the top of the correct ‘unsustainable’ part of the background scene.  I never saw the tool in action but I was told that it was used with much fun and learning in several schools in Somerset.

A diagram for Corporate Watch from 2004 (coloured in a few years later) showing how wasteful the corpoate food processing system really is. 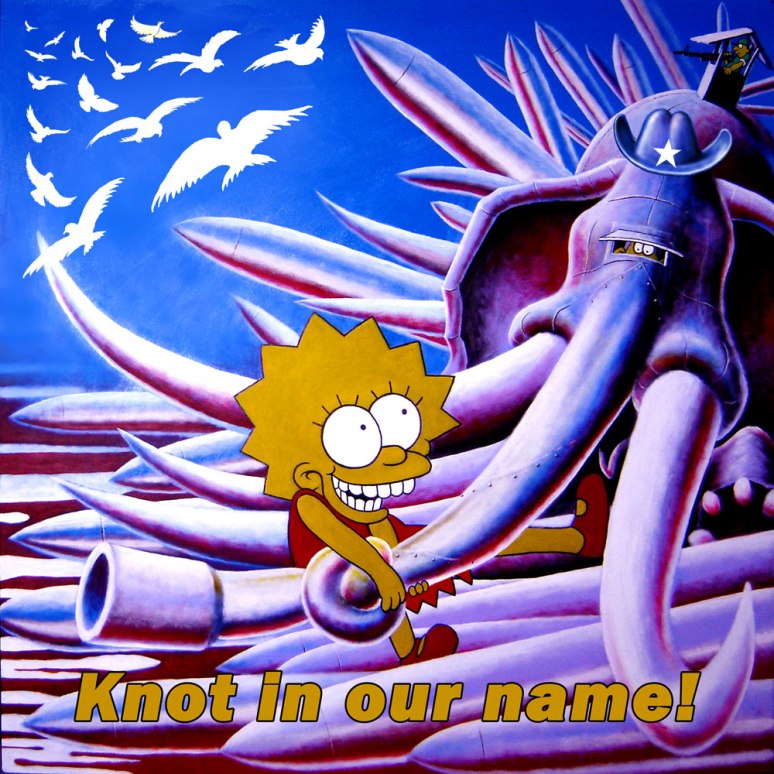 A painting inspired by the protests against the 2004 GOP convention in New York.

A cartoon drawn for the cover of the very useful “Green Guide to Oxford” booklet published by Oxford GreenPrint, around 2003, and used in many other places.

Illustration for the ETC Group in 2003, used in a poster and leaflet to promote European meetings to discuss the growing NanoTech industry.

An illustration for Best Foot Forward‘s 2001 project “City Limits” that attempted to measure and document the ecological footprint of London.  I made a series of reports and illustrations for this project.  The project has a dedicated website with PDFs of the report available to download for free.

A 2000 illustration for Corporate Watch Magazine, that was used as the back and front cover of the 10th edition of their magazine.

A simple drawing for Corporate Watch from around 1999. 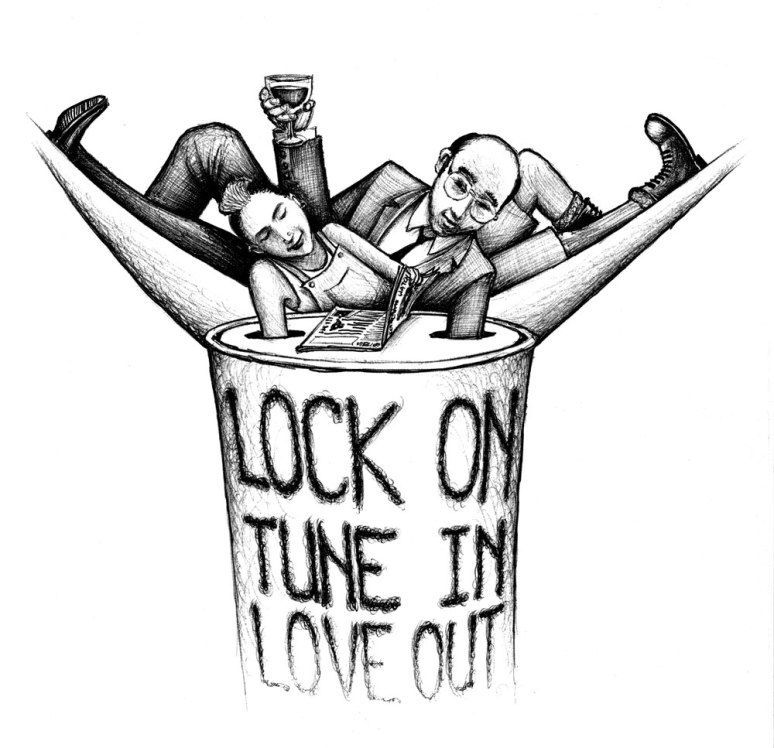 A drawing from 1998 for Corporate Watch showing two people in a hammock reading the latest copy of Corporate Watch magazine.  A lock-on is a heavy object that often involved deep metal arm-tubes that a committed protestor could attach themselves to in such a way as to make it very difficult for authorities to move them out-of-the-way.  Lock-ons were sometimes up trees (destined for felling), in paths and roadways or in buildings (destined for demolition).

The front cover drawing from 1997 for the classic handbook Road Raging: top Tips for Wrecking Road-building.  This handbook was written by a few of the key members of the campaign team that fought against the Newbury Bypass in 1995-1997.  I don’t know of anyone selling copies of the book, but an online version exists in various formats here.

A doodle that turned into an epic illustration, done with a 10-colour ball-point pen, around 1990, during a time that I was exploring pagan ideas, celtic history and the art of Simon Bisley and writings of Pat Mills. 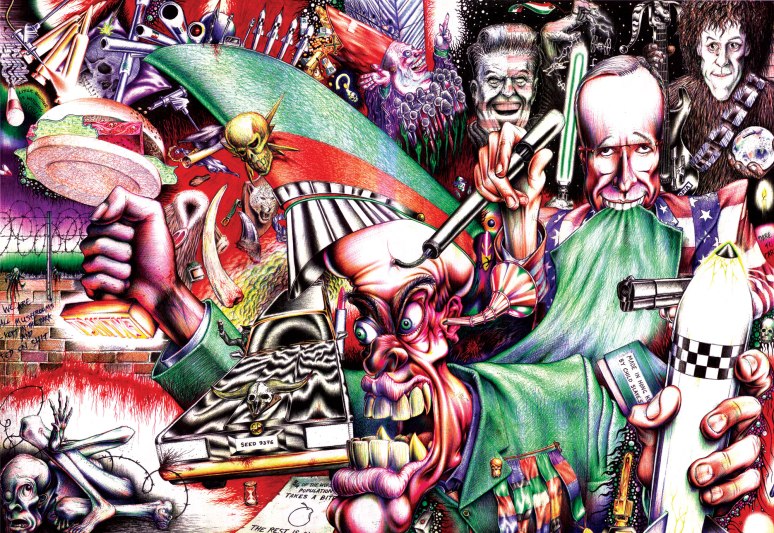 Another biro drawing from around 1989 that turned into a huge (A2) political extravaganza of teenage angst.  Bush senior was in the White House, Ronnie was still pushing ideas of Star Wars, and Bob Geldof was one of the few people brave enough to talk much sense.