much of the
Christmas break making
a new smaller bike trailer
out of bamboo and plywood.

It’s a great trailer – the one I now
use the most.  Its light, strong
(took my weight) and hangs off
one ladder hook above head
height in our lean-to so it takes
up almost no space.

It weighs just 10.5kg (23lbs)
including the two wheels, net
and tongue.

I went with smaller 20-inch
wheels to take up less room
when in small spaces.

It’s 85cm wide, so fits easily
between bollards at the start
or cycle paths / park gates.

From the top of the bamboo
frame to the floor is 55cm.

The floor (and some walls) are
made of strong black netting
which is light, strong and good
for letting wind through if the
trailer is empty.  I got the net
from my local scrap-store
Orinoco.

Here are a few photos
of the main stages of
its construction:

Here is the start of the frame taking shape, with a wheel to show the scale.

Here the first of the four plywood side-panels are being glued and clamped to the bamboo frame.  I used a very strong expanding foam polyurethane glue that is similar to a glue called Gorilla Glue.  It works very well, expanding and forcing itself into the grain of the wood as it dries.  The square lines on the hard-board sheet  helped me to line things up.

Here are all four walls attached such that the trailer can easily stand upright if needed.  These side-walls act as giant drop-pouts for the bolts of the wheels.  I used big washers on either side of the plywood to protect it from the forces of the buts and axles.  They are painted black (two coats of organic gloss).  The middle photo shows the net floor (and front and back walls) attached.  This is strong and light and very comfortable to sit in.  The finished trailer is on the right.

Here is the trailer on it’s first journey.  The top end is simply resting on the bike’s back-rack (like most of my trailers) and attached with a good strong bungee. 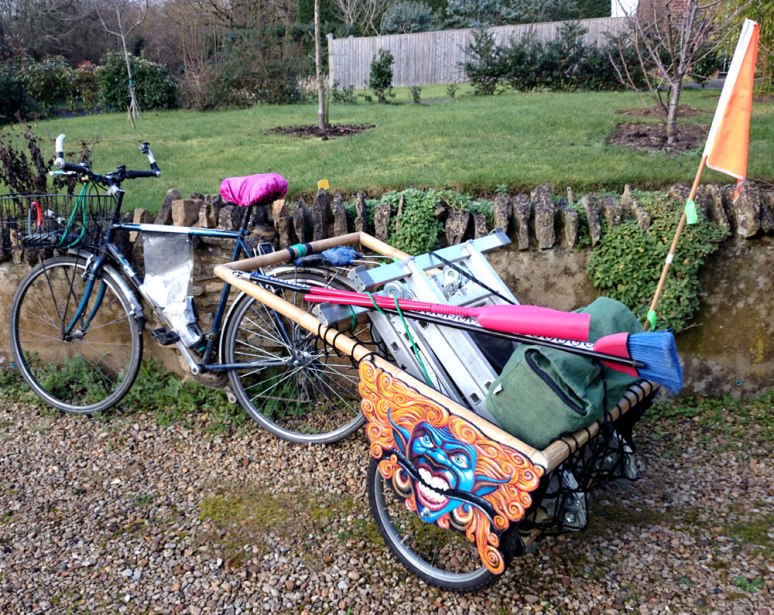 It’s proven to be a very great trailer – I use it quite a lot to move paints, tools, building materials, horse-manure for my Dad’s orchard, etc.  Large objects can fit on top.  Smaller items can go inside.  The flag helps hasty drivers know that this cyclist is a long vehicle.

A little bit about the illustrations on the sides:

On the pavement side of the bike trailer I wanted to have a fun and colourful design to catch people’s attention, especially children.  After some thinking I decided to go with a modern female character – based loosely on the remarkable film Avatar – written and directed by James Cameron and released in 2009.  One of the lead characters is a beautiful and strong female alien called Neytiri who leads the fight against the invading and eco-cidal humans.  During the story she reluctantly befriends the main human character and finds him clumsy, reckless and short-sighted.  At one point she snaps and says “You are like baby!”  This is my favourite moment in the film as, for me, it encapsulate very neatly the problem with mankind – we are behaving like small children playing with huge and lethal toys, grabbing everything we want for instant gratification, destroying much in the process.

I also liked Neytiri as she is a great example of a strong and confident woman who is willing to fight to protect her people, her environment and her planet.  We need to celebrate such characters more.  So, here is a sequence of the painting I made for the pavement-side of the bamboo bike  trailer:

I have always been interested in the mythology of the “Green Man” – a male personification of nature that is sometimes seen as intricately carved gargoyles on old English chapels and other old buildings.  While subservient to Mother Nature, he is part-man and part-nature.  So he has not lost his connection to his environment as most of use seem to have increasingly done.  He has been interpreted in different ways over the centuries, sometimes as a faun, a hunter or woodsman, sometimes as a demon or devil, the ‘black pig’, as Herne or Cernwyn or as the Horned God.  Here are a few images I found online that inspired me to make a painting of a ‘green man’ on the side of this bike trailer:

Here is a sequence showing the stages of my painting of the Green Man on the road-facing side:

I finally made the tongue for this bike-trailer:

It’s a simple piece of cardboard wrapped in weatherproof red gaffer tape, then painted with wrinkles, lumps, droplets of moisture and shadows.  It’s stuck to the spokes with a bit of gaffer tape.  I hope it makes people laugh.  The green man is licking the road, maybe as an act of devotion to his Mother Earth.

One thought on “Bamboo Bike Trailer”